the precariousness of home 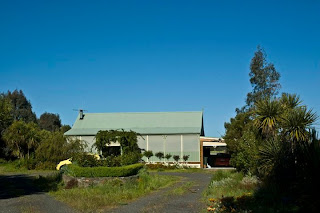 This is a photo of my house taken by my friend Ben who visited our farm for the first time on the weekend. He said while he was sitting on our lawn drinking a glass of wine: “You guys own all this. The grass, the garden, it’s all yours. You won’t ever have a landlord come over and inspect your house again.” It’s a weird feeling to come to terms with, owning a home, and I don’t think it has become any less weird in the past nine months. This is the first time I’ve ever lived in a house that’s been owned by me or any member of my family. I was always hesitant about the idea of “home ownership” and have never really able to articulate my unease around questions of place and belonging.

I spent time with a group of Chaplains yesterday as part of my work with schools. One Chaplain spoke of her interest in the sacred within Australian literature and this encouraged me to do some thinking today about notions of a spiritual home within the Australian context.

A few years ago I did part of a Graduate Certificate in English at Melbourne Uni and took a subject with Jennifer Rutherford called: “The Uncanny in Australian Literature”. She completely broke my brain- in a good way- and it has changed the way I relate to Australian film and literature. The course explored the haunting of the Australian landscape found in much colonial fiction and poetry and questioned this country’s sense of the sacred, of home, of place, of identity….

I came across this essay today by Lyn McCredden from Deakin University entitled 'It's a hungry home': postcolonial displacements, popular music and the sacred. It is continuing to provoke my understanding of home and strangerhood being in constant negotiation with each other. I wanted to share some of the essay here:


“Is this oscillation between home and homelessness – experienced differently by colonisers and colonised - able to be seen as dialectical, or are we dealing here simply with contradictory and necessarily antagonistic motions? Can the human desire for home, belonging, land, place – so powerfully voiced by Indigenous and diasporic peoples, and differently by colonisers – hold at its heart, in reasoned, social human practices, its opposite, a significant acknowledgement of homelessness, rootlessness, journeying, and the exclusions, expulsions, barriers caused by defending home? What can this dialectical epistemology of home promise to achieve? And what distinctions need to be maintained in regard to colonisers and colonised when thinking about this doubleness?....
…what is the particular dynamic that needs to be acknowledged and worked through for white Australians, now? Is it possible for white Australia, looking into the distorted mirror of Australia’s history, to see both the ongoing Aboriginal dispossession and to see its own face reflected, but differently, transformatively? The argument of this essay is that to do so, and to continue the processes of renewal and justice, it is necessary for non-Indigenous Australians to learn to think and practice “home” and “dislodgement” together…”
McCredden later goes on to reference my brain breaking lecturer:
“…Australian critic Jennifer Rutherford is interested in intervening in monolithic understandings of home and nation…. she seeks to disrupt unified mythologies that paper thinly over deeper, psychic struggles for home. In her cultural and literary analysis of Australia, The Gauche Intruder, she focuses on “the way that fantasies of the good provide a camouflage for aggression at both a national and local level: an aggression directed both to an external and an internal Other.” (10). For Rutherford, following novelist Patrick White’s infamous 1950s description of Australia as “the Great Australian Emptiness”, she argues that the good, homey, egalitarian nation of Australia needs to recognise the spiritual dimension of its emptiness, an emptiness which is…
'an aggression towards the Other that has been endemic in white Australian history; the fantasy of the good neighbour and the good nation that has sustained this aggression; and a certain experience of emptiness, of a symbolic fragility or inequality to the task of representing this nothingness, that fantasy has never been able to occlude. (12).'
The Gauche Intruder is alive to the power of national myths, and of the rhetorical and political mechanisms actively constructing such myths. Rutherford places in linguistic, literary and psychoanalytic terms what happens when we buy our own rhetoric, when home becomes the monolithic, protected, expulsive refusal of others, even as it dresses itself up in the very terms of protection of the nation, home, kith and kin; in other words, when home is mandated as this “splitting of humanity into natives and strangers,” (Levinas 232), rather than the double, dialectic sense, for post-colonial citizens, of homelessness within all understandings of home.”
References:
Levinas, Emmanuel. Difficult Freedom: Essays on Judaism. Trans. Seán Hand. Johns Hopkins Jewish Studies. Eds. Sander Gilman and Steven T. Katz. Baltimore, MD: Johns Hopkins UP, 1990.

when there's too much to say...

I got home from the UK almost three weeks ago, and I haven't been able to write anything down in coherent sentences since then. I blamed jet lag for a while, but that excuse is getting a bit old, so I might just write down some partially formed thoughts...

I was in England on Cheryl's oxygen tour. And it really was oxygen for me: it came at a time when I really needed to breathe some fresh air. I can't express how privileged I feel to have been given the time and space to listen, learn and explore with an insightful group of people. Our group spent time observing the role art plays in public spaces and had the opportunity to meet with some incredibly generous artists and thinkers. We spent time in Liverpool, Leeds and London and reflected on the contexts we were visiting by asking:

"Which spaces leave room for the possibility of transformation?

"Which spaces are invitational and why?"

These questions have complex and multiple answers but I will try to give some personal reflections and examples from some particular places. I think, for me, the most transformative spaces allowed me to experience a different way of knowing. I find safety in thinking with words and mulling ideas over in my mind. For the first part of the trip, I found myself distilling an experience into a single word. Our time at a beautiful sculpture exhibition at the Gloucester cathedral was summarised in my mind as "holy", after sitting with an Antony Gormley piece in the same exhibition I was left with the word "surrender". I was moved by these works, and I was blown away by the quality and the curation and the space. But it wasn't until a week later, when we had been at the Hayward Gallery in London, that I realised the power of a space that can leave you with no words at all.

We were very lucky to be at the Hayward on the last day of the Ernesto Neto exhibition The Edges of the World. Cheryl wrote about the space beautifully on her blog, and I will add some personal thoughts below. 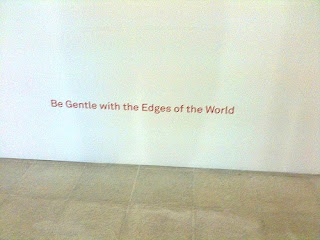 This sentence still sends shivers down my spine: "Be gentle with the edges of the world". The space embodied the word gentle. The installation was immersive and invited experiential knowing. We were allowed to touch, to smell, to live into the space. Everyone changed when they were in this place: people were smiling at strangers. It was only later that I could describe this exhibition using words...Neto's work spilled out of the walls of the gallery and into my world. I felt invited to be my whole self- all of my senses were engaged. The space lingered in me, and encouraged me to think in unfamiliar ways. My body knew that something had changed in me, but it took a while for my body to tell my brain about that shift.

It was only after a day that I started thinking about the violent language we usually use to describe our attempts at pioneering new ways of being. We talk about "cutting edge", "forging ahead", "pushing forward", "breaking new ground". We try to force others into new places...and then we are confused when these violent approaches are not embraced by the people in our worlds. Neto's work shifted something in me, and helped me to acknowledge the violence in my own approach to change. Being in this space, I was able to feel, see, smell, taste and try on a gentler world.


Neto encourages us to:

"...breathe through our pores,
close our eyes to see,
smell to listen,
dance to levitate..." 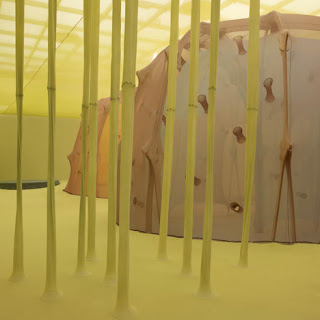 After four weeks I can still feel the softness of the space, evoke the calm smells, the vibrant colours. It takes a poetic moment to remove us from rhetoric, from cerebral understanding, and to allow a space to transform not just our thought patterns, but to challenge our entire being to live differently.
As I move between strangerhood and welcome
sister and friend,
wife and daughter,
colleague and mentor,
I must not forget the edges of these worlds
I must try to be gentle
﻿
Posted by Sarah at 8:49 PM No comments: 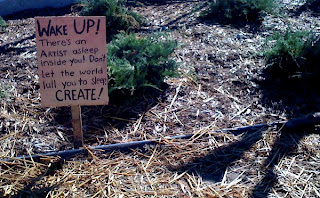